A Man Walks into a Barn 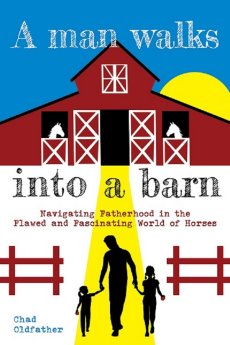 A smart, funny memoir exploring the evolution of a man and his relationship with his daughters as they grow up in the grips of the equestrian life.

Nineteen years ago, Chad Oldfather found himself the father of a two-year-old girl who, out of nowhere, became obsessed with horses. Plenty of dads just “write the checks” and steer well clear of the barn; Oldfather instead embraced his daughter-s interest, spending hours sitting ringside and many more in the car, commuting to lessons and competitions.

Soon enmeshed in the sport with his younger daughters similarly afflicted with cases of “horse-crazy,” Oldfather found himself learning not just about the animals that so inexplicably drew them, but also about people and parenting, and to his surprise, how to better do his job as a law-school professor. As he shared experiences with individuals from all walks of life, from custodians to billionaires, and befriended those just learning to ride as well as Olympic medalists, Oldfather discovered many things about the horse world that he loved…and many that he hated.

A book for parents, whatever their children-s passions, and for equestrians, who know what it's like “on the inside” (but maybe not what it's like on the outside, looking in), A Man Walked into a Barn is a wise, witty, and, at times, critical look at both the light and dark sides of horse sport. Readers find themselves silent partners in Oldfather's family as he struggles to be the best dad he can, supporting a child's dreams in the face of long odds and extraordinary expenses

He writes about his parenting choices and the strange world he finds himself in with searing honesty, examining riding's high cost and the inaccessibility and inequality that results; abusive trainers; ethical blind spots that have long characterized the buying and selling of horses; and the sport's unsettling history of sexual predation. Aware of the flaws and dangers, as well as the benefits, he strives to protect his girls while supporting their equestrian ambitions the best ways he knows how.

Filled with the joys, heartbreaks, and life lessons that come from training, competition, and time in the company of horses, this is mostly a book about family, and the strong bonds that can form when parent and child join hands and pursue a passion together.

Book Title: A Man Walks into a Barn
ISBN: 9781646010554
Author: Chad Oldfather
Publisher: Trafalgar Square
Format: Paperback
Author Notes: Chad Oldfather has ridden horses just enough times to appreciate how difficult it is to do well. He has also mucked stalls, cleaned tack, stacked hay, helped fix fences, and logged hundreds of hours ringside as his daughters have taken lessons and ridden in shows. By day he is a professor at Marquette University Law School where, among other things, he teaches classes on and writes about judicial behavior, constitutional law, and the jurisprudence of sport, and serves on the Board of Advisors to the National Sports Law Institute. His non-legal writings have appeared in the Chronicle of the Horse, the World Equestrian Center Magazine, and Harvard Magazine.
Number of Pages: 256